It’s 10 pm on a January evening and I’m sitting in a bar with some of the boys from the Plymouth mountain rescue team. A guy named Luke turns up with a beer and hands it to me, he starts talking about using his ice axes, he brought them to Scotland but till now hasn’t had the opportunity to properly get involved. He makes a suggestion that we should climb a small 20m route on the north face of Ben Nevis.

A few beers down and we agree to meet at 4 am to be back for tea and biscuits or to be a more precise question and orange juice.

The next morning we meet in the lobby and start walking towards the north face. We’re walking down a path going through the woods, it’s pitch black and we’re relying on google maps, hoping to find a right spot where Luke could hammer his ice axes into some frozen water. It’s definitely cold enough, I’m well aware of this fact as I decided to wear a t-shirt with an outer shell and some pants. Dressed for weather in London but not suited for a Scottish winter.

The week prior to this I barely made it out of an avalanche so for this trip I was determined to keep myself away from anything that looked like it would go, of course, it was pitch black and since google maps had no way of telling us what degree slope we’re looking at we had to rely on what our head torches managed to light up.

At this point what I did not know is that Luke had set his goal for one of the longest gullies on the Ben. We walked for one maybe two hours, in my head, I was thinking we had gone way past the West flank but Luke was determined to reach a good spot.

We start heading across a snow field into a slope, very quickly I realise we’re way past the 30 degrees I was hoping for. It was around 7 am before we saw where we were standing, by this time I was stuck up to my waist in the snow, digging my way up a drift snow-filled gully. By 9 we were maybe a third up the mountain and realised then that we were probably not going to make it down for breakfast and we’d be better off hoping to make it down without getting buried.

By this time I was chowing down on the second half of my snickers, after all, we were only going to be a few hours so my pack lunch was for sure insufficient for what we were doing. There was also no talk about water, eating snow on the way up was the only way to get hydrated. We ended up deciding that attaching ourselves to one another using a rope was going to be the safest, after all, if one of us lost grip we’d both be in the shit and so y new friend whom I met only a few hours earlier made a pact to get shit done.

The keyhole a triangle in the rock let us up into the last 30m of the climb, above us was a corneous waiting to go but there was absolutely no way around it and so we started digging our way through this overhanging sheet of ice and snow. At least we were now engaging the ice axe in every way, Luke’s test day was going well.

We ended up suiting at around 3 pm and got off the ben by around 6 pm, exhausted and hungry we got back to the hotel, the rest of the rescue team were in stitches when they saw us turn up. Looking back we were lucky and got away with a good story.

Luke later told me that he had always planned on doing that gully but knew I wasn’t going to charge up there unless he honey potted me. 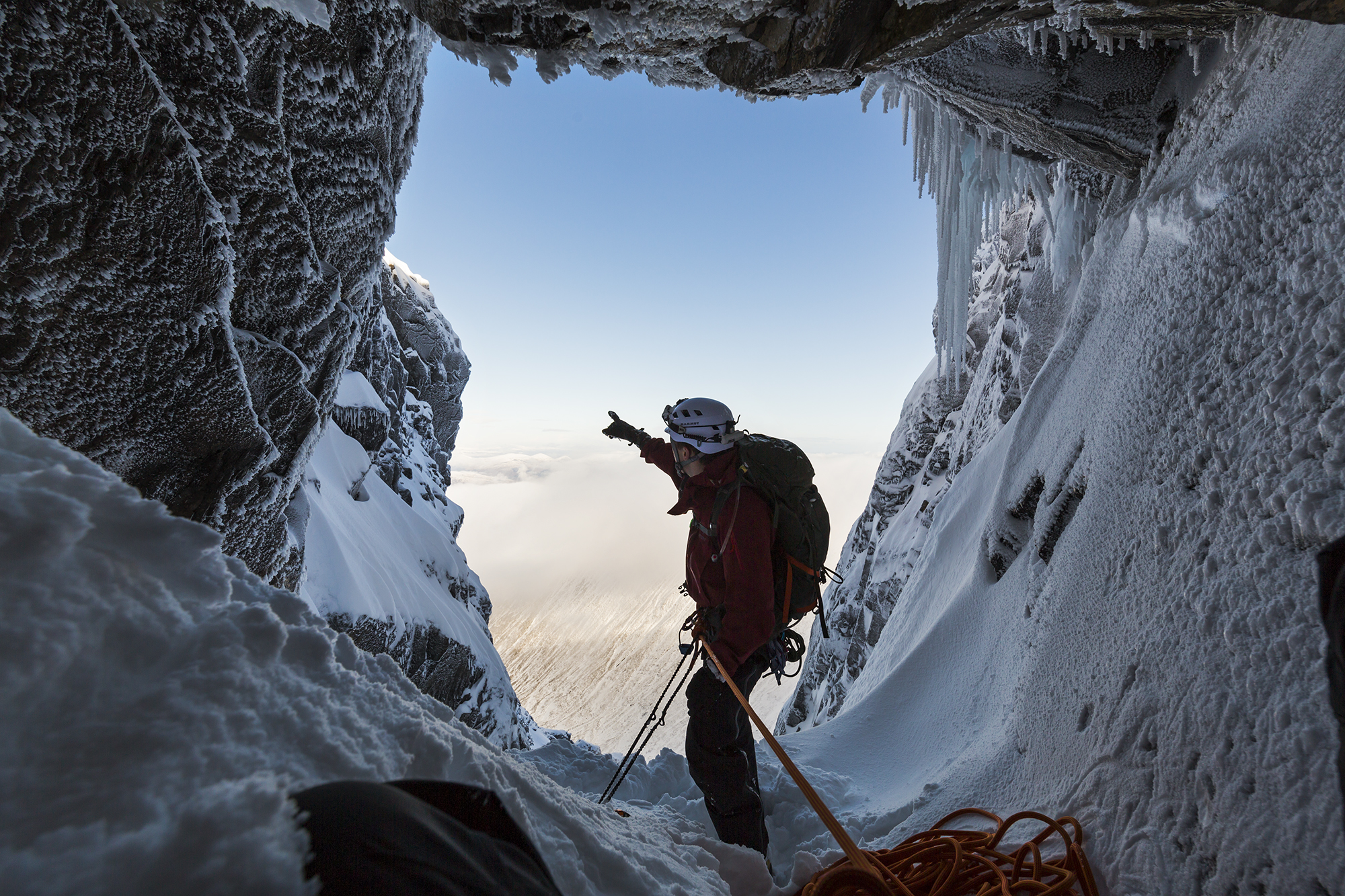 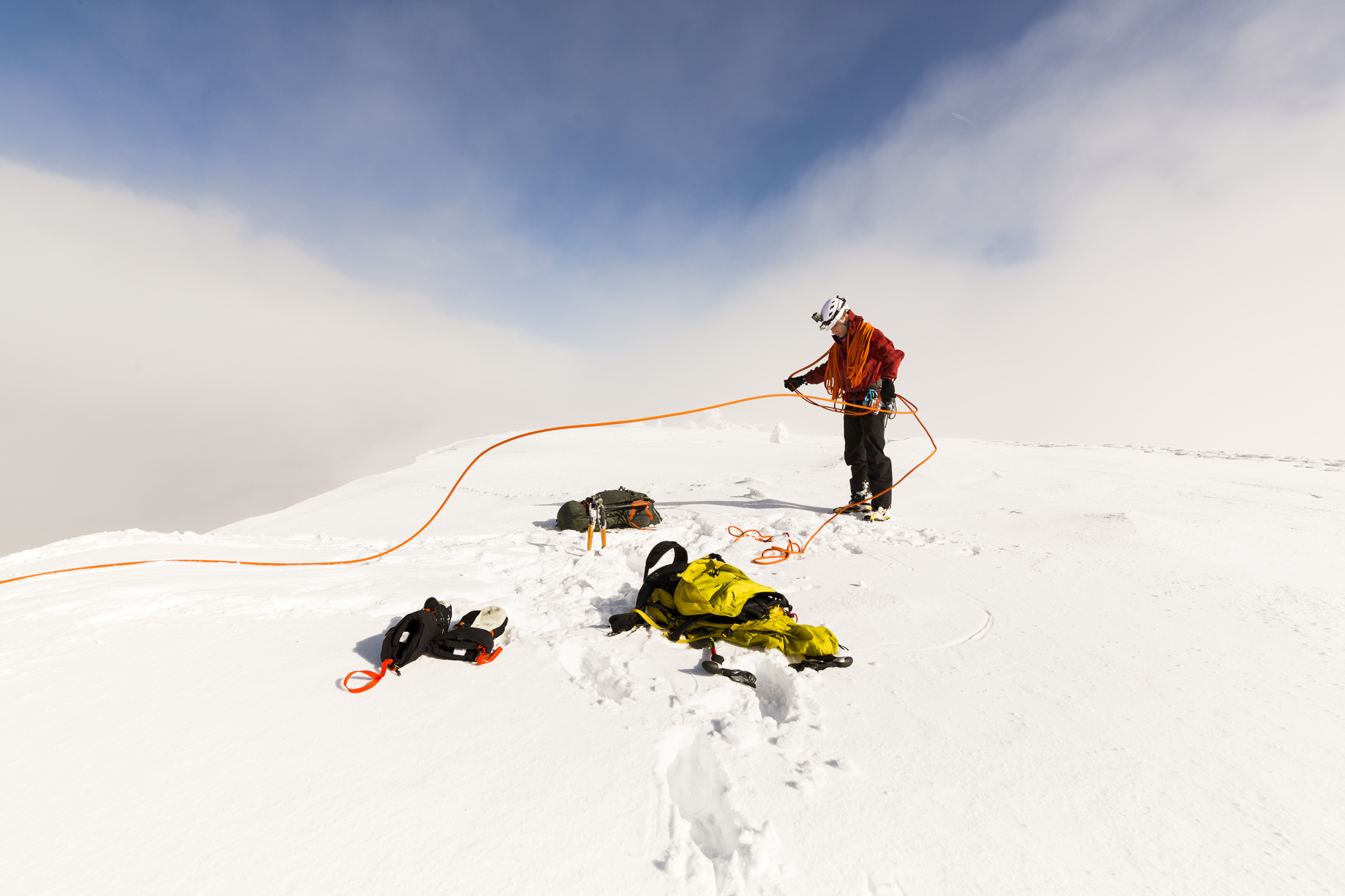